We have some exciting news to share. We have a new addition joining our family this December and we couldn’t be more thrilled! I also wanted to share some of my fertility journey with you, as it has been a long one, but it has been so worth the wait. 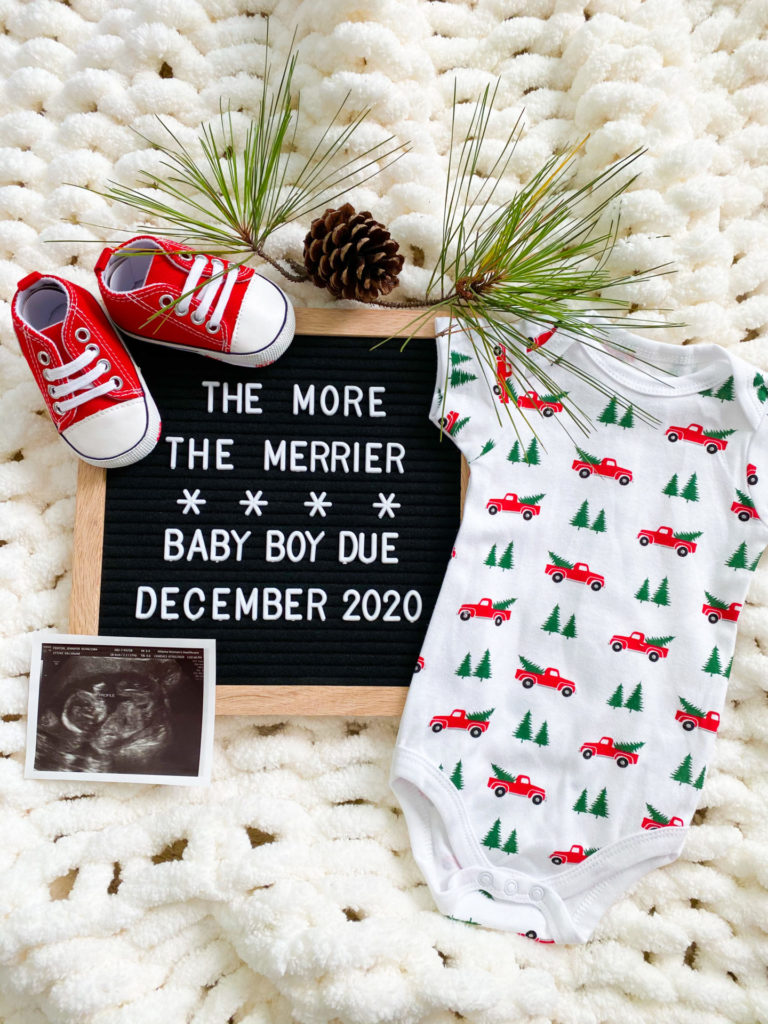 The Beginning of our Fertility Journey

A few months after Kara and I were married, we went and visited a fertility specialist for a consultation. This was about 4.5 years ago. We knew that we wanted to start a family, but needed guidance on the best way to go about this. After meeting with the doctor, we decided that IUI was for us on the start of our fertility journey. It is less invasive and not to mention a lot less expensive. I had to go through a series of tests to make sure IUI would be a viable option. Some were easy, some were a little uncomfortable, but we were excited to get started!

We were super naive and thought that on the first try of IUI we would get pregnant. Well, we were wrong. After 4 failed IUI’s our doctor suggested that we switch to IVF. We weren’t 100% thrilled with this idea as it is more invasive and a lot more expensive. But again, we knew we wanted to have children and if this is what we needed to do we would do it.

I had my egg retrieval done in November of 2017. I remember that year Kara and I celebrated Thanksgiving on our own as we had appointments over the holiday to monitor the progress. Egg retrieval is an interesting process. You are pumping your body full of hormones and don’t feel quite like yourself. You’re then under a light sedation for what felt like seconds, but was about 10 minutes or so. The doctor came over and let us know we got 9 eggs from the retrieval, which wasn’t the best news. But we were hopeful they would all make it to day 5.

Only 2 embryos made it to day 5 and they were sent off for genetic testing. We decided to do the PGS testing for piece of mind and to give us our best shot. I actually had a work trip to London scheduled and while there was eagerly awaiting the results. I remember being at a dinner meeting and my phone rang. Eager to find out the results I excused myself to speak with the doctor. One of the embryos was not viable and the other one they couldn’t get a read on. Deflated I called Kara and decided when I got back, we would meet with our doctor.

We spoke with her and decided to go ahead and give the embryo transfer a go. Again, we were naive to think it would work for us. It truly is a miracle that people get pregnant. The transfer didn’t work and we were definitely upset about it. Did we want to go through another egg retrieval again? What if it was the same result?

We decided to take a pause on the fertility treatments and our fertility journey. Around that same time, my best friend had become a foster parent. We thought maybe that was something that we could do instead and be of service to our community. This was now the summer of 2018 and we started our classes. We were excited about the possibilities, but also nervous. That summer Kara went and visited her family in Illinois and while she was there an opportunity arose. There was an acquaintance of the family who was going through some issues and she wanted Kara and I to become legal guardians for her little girl. It was one of those moments that just seemed to fall into place and feel so right.

While Kara was there, the birth mother signed guardianship papers, but now it needed to go through the court. In August, the aunt of the little girl who was taking care of her said that we could go ahead and come up and bring her back to Georgia. We spoke with our attorney here as well as our attorney there and both said that it was fine. We had gotten her room all set up in our home, friends and family had bought gifts, and we were just so ready to give this little girl so much love. The drive was long, but we were so excited and couldn’t wait!

Too Good to Be True

We got into town late and the next morning our attorney reached out to us. The little girl had been put into family services. We spent a week in Illinois seeing what we could do to get her out, but unfortunately for us, there was nothing we could do. The birth mother relinquished the guardianship paperwork and because she was no longer supportive of us becoming her daughter’s guardians, there was nothing we could do.

To say that we were heartbroken is an understatement. That long car ride home with an empty booster seat in the back was just awful. And coming home to a bedroom that we had set up for a little girl that we now had to walk by on a daily basis was torture. It took us a while for those wounds to heal before we could consider what was next for us.

In January of 2019 we decided we wanted to meet with our fertility doctor again and continue on with our fertility journey. In speaking with her, she thought that Kara might have a better shot of having more eggs, but since I wanted to be pregnant we could do what is called reciprocal IVF. Modern medicine is amazing! With that in mind, we decided to give this a shot and see what would happen. Kara’s egg retrieval was in March of 2019 and we got 19 embryos! We were definitely excited with that number. However, only 3 of them made it to day 5 and were now being sent for genetic testing. We definitely said some prayers for all 3 to come back okay and luckily for us they were! We had 3 chances to make this work for us.

I started on my shots, which is always so much fun haha. The first transfer was unsuccessful. We decided to do it again. This time I added in acupuncture and we also did a slightly different protocol where I added claritin, pepcid, and prednisone to my estrogen and progesterone I was already taking. I also highly recommend acupuncture to help manage the stress of it all.

We got the call from the doctor and my HCG levels were right on the edge of being pregnant. I went in for blood work 2 days later and it had increased, but not enough to really make it viable. I would go in every other day for blood work and each time it was increasing. At first they thought it could be an ectopic pregnancy, but it ended up not being so and was more of a chemical pregnancy. The embryo had tried to implant and may have for a little bit, but just couldn’t stay attached. The good news was that we knew I could get pregnant.

Since we only had one embryo left, Kara and I decided to take a break. We both just needed to clear our heads. I also wanted to get more focused on eating right and fitness. Those were things that I could control. We took a trip to Ireland in December, which is just what we needed to recharge. In January I joined a local spin studio and really got into it. I honestly loved going there so much!

March was going to be the month of our last embryo transfer and we had pretty much decided that this was going to be it for us. If it didn’t work we would look into other options, but for IVF this was it. We had started our protocol and were about 2 weeks into the meds and shots when Covid shut everything down. Because we were already in the middle of our protocol our doctor gave us the option of continuing with treatments, but we had to sign a waiver. Kara and I were conflicted with what to do, but ultimately we decided to continue with the plan. We were tired of waiting and who knew how long it would take to start back up again.

We are so happy we went with our guts and decided to go for it! When we received the call with the good news from the doctor we were honestly in shock. After years of trying, it had finally happened. We immediately called our families to tell them the good news!

Here I am taking my last shot of my fertility journey. Such an exciting feeling! 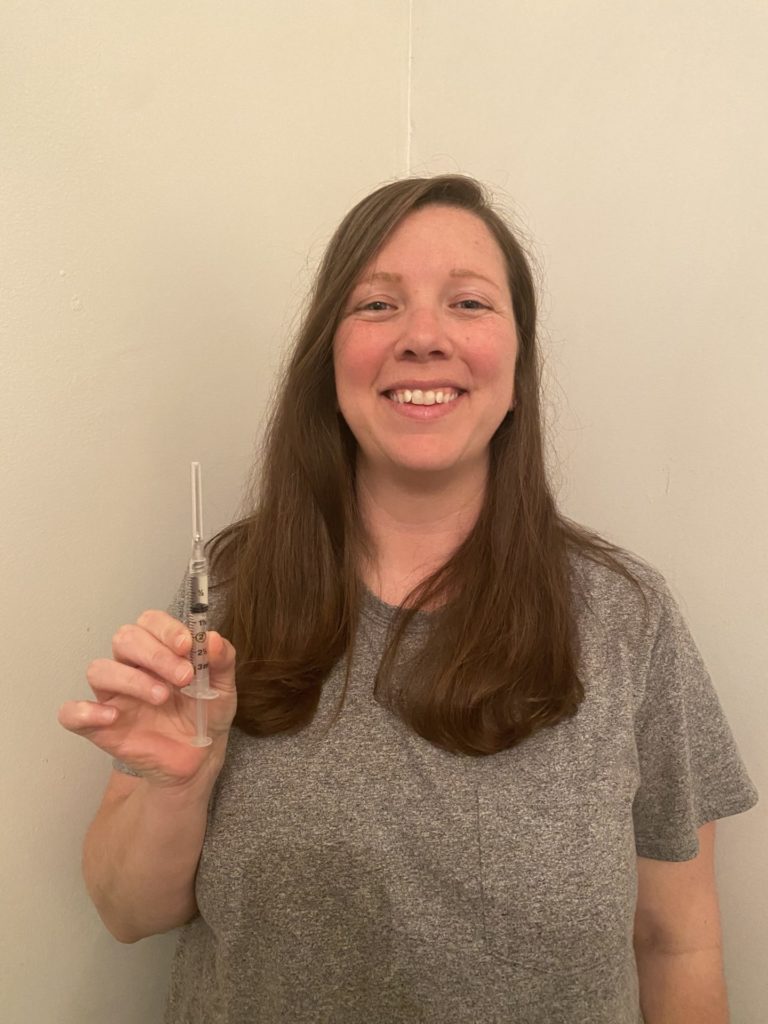 But let me tell you, being pregnant is just as stressful if not more stressful. It’s gotten better now, but for the first trimester I was a bit of a nervous wreck. I think because of the years of trying and knowing that this is it for us, there is just a pressure I put on myself to make sure nothing bad would happen. Which is a little ridiculous because it is out of my control for the most part. We had a couple of little scares with some things, but everything always ended up being okay.

My mom and I have a running joke that my doctor’s office calls me “Hyper on 2” like the mom in Home Alone. Thankfully they have been so amazing and patient! And I have gotten a lot better as I moved into the 2nd trimester. I had my anatomy scan last week and baby boy is doing well and growing about a week ahead. Now we are just eagerly awaiting his arrival and working on several home projects, which we’ll be sure to share with you. Like I said, it has certainly been a long fertility journey, but oh so worth the wait!

Don’t forget to Pin this to your favorite Pinterest Boards! 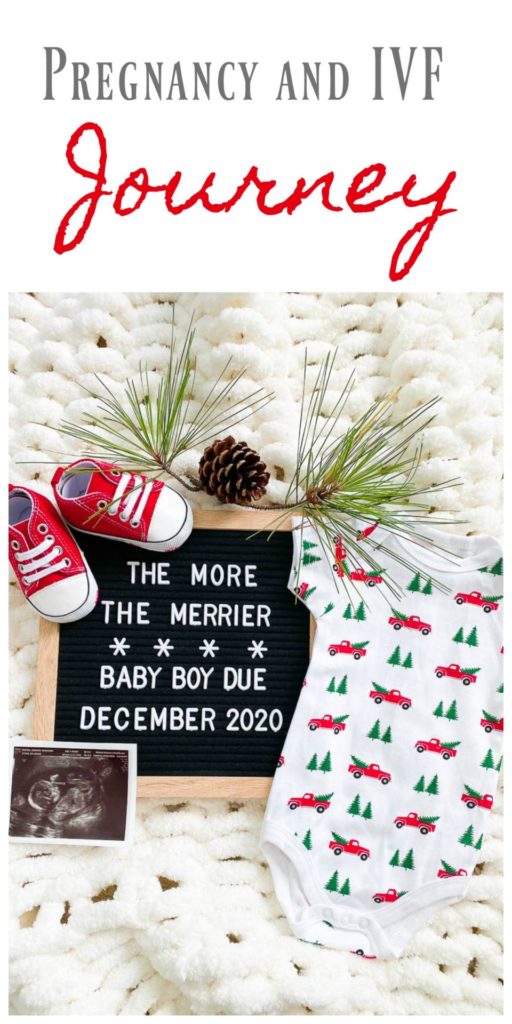 How To Create a Gallery Wall

Home Tour and Some News

Hey friends! Our homes have been de-Christmased (y

We are snuggling in this morning as it’s cold an

Do you decorate your porch for Christmas? We espec

Hey friends- we made it to Friday! For some reason